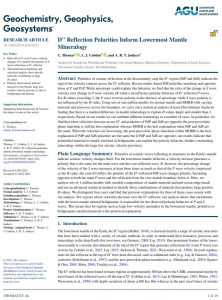 The TIMEleSS project has a new paper in September 2022! TIMEleSS PI C. Thomas is the first author of a publication entitled D” Reflection Polarities Inform Lowermost Mantle Mineralogy in the journal Geochemistry, Geophysics, Geosystems from the American Geophysical Union.

In this work, C. Thomas and co-authors L. J. Cobden, A. R. T. Jonkers investigate the polarities of seismic waves reflecting at structures in the Earth’s mantle and how they can be affected by seismic velocity changes at the interface. For the lowermost mantle reflector, a velocity increase generates a polarity that is the same for the main wave and the core-reflected wave. If, however, the percentage change of the velocity of the S wave increases at least three times as much as that of the P wave velocity (expressed as the R-value, the ratio dVs/dVp), the polarity of the D”-reflected PdP wave changes polarity, becoming opposite to both the main P wave and the reflection from the core-mantle boundary below it.

In the publication, they analyze sets of 1 million models with variable compositions of mantle material and mid-ocean ridge basalt and use an advanced statistical method to identify those combinations of minerals that produce large positive R-values. They distinguish four cases and find that previous explanations for three of these cases concur with our analysis. For regions where velocities decrease over the D” reflector, the analysis shows that enrichment with the lower-mantle mineral bridgmanite is responsible for the observed polarity behavior of P and S waves. This means that for regions such as large low-velocity anomalies in the lowermost mantle, primitive or bridgmanite-enriched material is the preferred explanation.