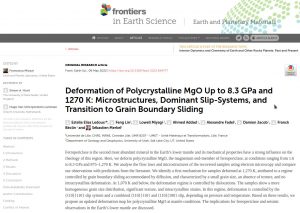 We have a new publication! On May 9th, 2022, former TIMEleSS PhD student Estelle Ledoux published a new paper in Frontiers in Earth Science: Deformation of Polycrystalline MgO Up to 8.3 GPa and 1270 K: Microstructures, Dominant Slip-Systems, and Transition to Grain Boundary Sliding.

The work is a result of a collaboration between the Université de Lille and the University of Utah. We focus on polycrystalline periclase, the pure Mg end-member of the second-most abundant mineral in the Earth lower mantle, ferro-periclase, for which mechanical properties are important to understand flow and the dynamics of the Earth mantle.

we deform polycrystalline periclase at conditions ranging from 1.6 to 8.3 GPa and 875–1,270 K. We analyse the flow laws and microstructures of the recovered samples using electron microscopy and compare our observations with predictions from the literature. We identify a first mechanism for samples deformed at 1,270 K, attributed to a regime controlled by grain boundary sliding accommodated by diffusion, and characterized by a small grain size, an absence of texture, and no intracrystalline deformation. At 1,070 K and below, the deformation regime is controlled by dislocations. The samples show a more homogeneous grain size distribution, significant texture, and intracrystalline strains. In this regime, deformation is controlled by the ⟨110⟩{110} slip system and a combined ⟨110⟩{110} and ⟨110⟩{100} slip, depending on pressure and temperature.

Based on these results, we propose an updated deformation map for polycrystalline MgO at mantle conditions and discuss the implications for ferropericlase and seismic observations in the Earth’s lower mantle. 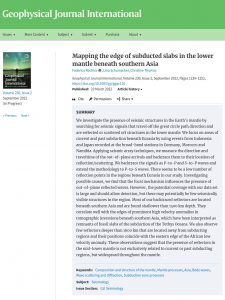 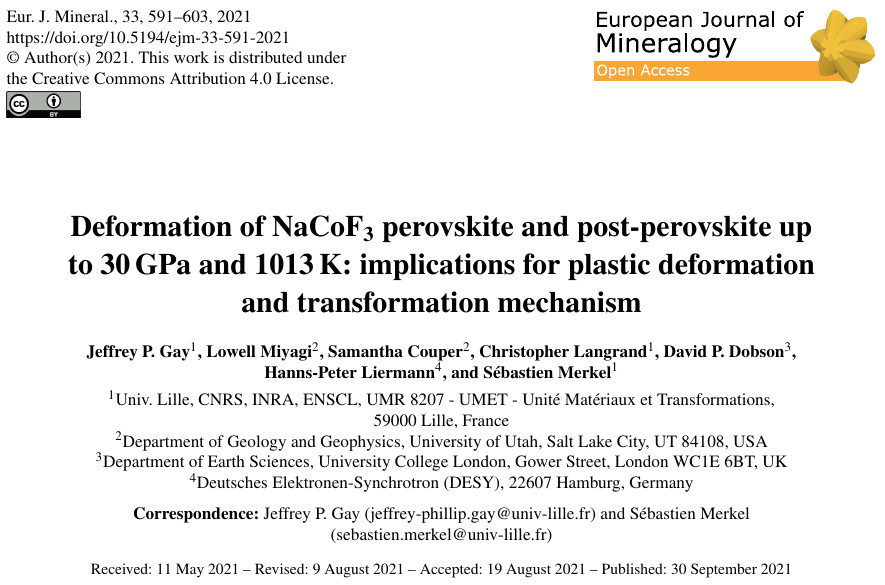 A new publication from a TIMEleSS student in the European Journal of Mineralogy : Deformation of NaCoF3 perovskite and post-perovskite up to 30 GPa and 1013 K: implications for plastic deformation and transformation mechanism.

Jeff Gay uses a resistively heated diamond anvil to study the plastic deformation and phase transformation mechanisms in NaCoF3. Under ambient pressure, NaCoF3. crystallizes in the perovskite structure, and later transforms to the post-perovskite. It is hence an excellent analogue to understand the physical properties of bridgmanite, the most abundant mineral on Earth, and dominant component of the Earth’s lower mantle between 660 and 2900 km depth.

These results from a collaboration between the Université de Lille, the University of Utah, University College London, and the PETRA III / DESY synchrotron source were published on 30 Sep 2021 in the European Journal of Mineralogy.

TIMEleSS members met virtually in September 2021 to discuss on the transition zone. The meeting was led by Estelle Ledoux, PhD student at the Université de Lille.

The meeting was an occasion for Estelle to present her work, get feedback from the rest of the group, prepare for future collaborations, and get ready for her up-coming PhD defense! 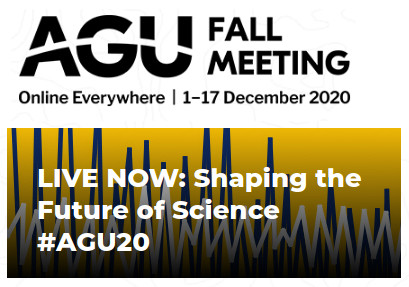 The Fall Meeting of the American Geophysical Union is on online and everywhere in 2020! The AGU Fall Meeting typically attract over 25 000 registrants from all over the world, in a conference center somewhere in San Francisco, New Orleans, or somewhere else in the United States. This year, the Fall Meeting is fully online and TIMEleSS members are happily joining in for presenting their latest results!

Presentations from the TIMEleSS project include

The first day was dedicated to progress report by the PhD students. The second day followed by a scientific presentation by our guest Morvarid Saki and discussions on the geophysical implications of the results.

Despite the 2020 conditions, the TIMEleSS project is nicely moving forward. Students are reaching a stage when they fully interact with each other. The PIs can’t wait for next year with results and publications!

TIMEleSS members are in Münster!

The training is the opportunity to move on to the next step in the TIMEleSS project: combining Mineral Physics and Seismology observations and try to say something about deep mantle processes!

The second Deep Earth Mini Symposium was held at the Institute for Geophysics of the University of Münster on November 18th 2019.

The one day symposium has presentations from local and international speakers who all came to Münster for a day of science and discussions. The workshop was organized by TIMEleSS PI C. Thomas. 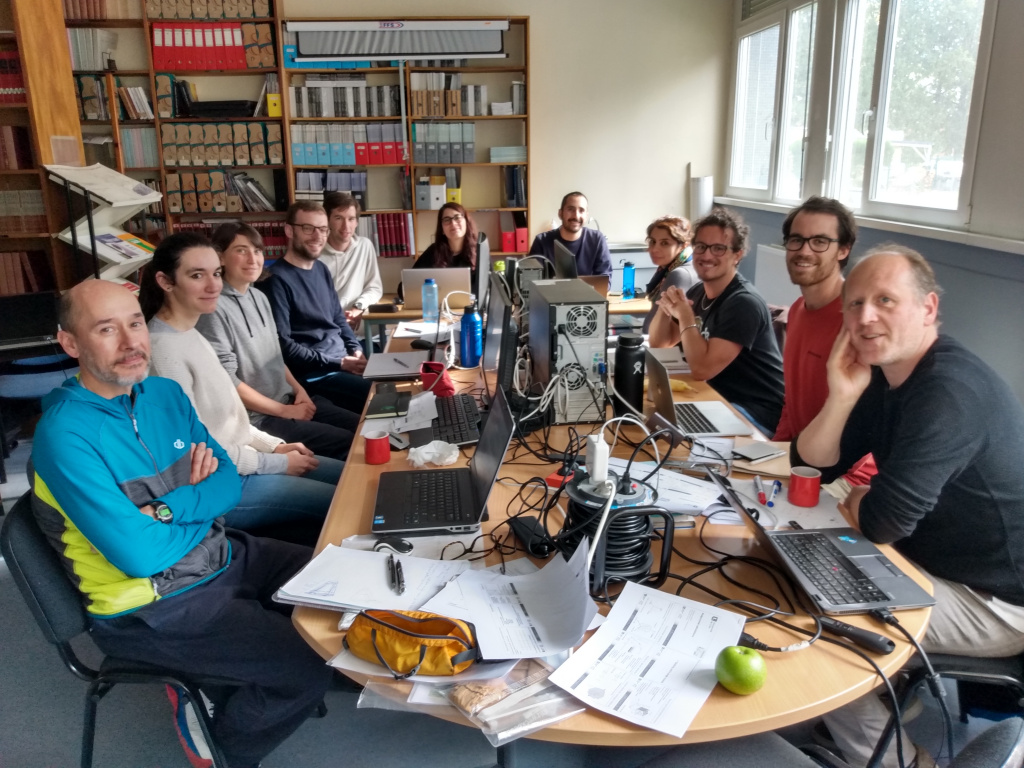 This weeks, students from the TIMEleSS project and our special guests are in Lille to learn about polycrystalline properties.

The course is focused on calculating elastic properties and seismic wave propagation features in a polycrystal, textured or not. We also spend some time trying to model texture development in a deformed polycrystalline aggregate thanks to VPSC simulations.

All should dream of Euler angles and 3D-rotations by the end of the week!

Matthias Krug from the mineralogy group in Münster is visiting the Lille group for one month!

He is working with Jeffrey Gay and Estelle Ledoux to improve their methods for processing x-ray diffraction data.

Hopefully, by the end of the month, they will all have nice datasets to think about!

TIMEleSS members will be at GeoMünster 2019! GeoMünster 2019 is the Annual Conference of the Deutsche Geologische Gesellschaft – Geologische Vereinigung (DGGV – The German Geological Society) and the Deutsche Mineralogische Gesellschaft (DMG – The German Mineralogical Society). It will be held 22–25 September 2019 at the Münster University, Germany, and will be organized and by the Institutes for Geology and Paleontology, Mineralogy, and Planetology.

TIMEleSS members are organizing a session entitled Minerals in the depths: an experimental approach, with a oral presentation of TIMEleSS student Matthias Krug and a poster from our partner Iliya Kupenko.

See you in Münster in September!

The first day was dedicated to progress report by the PhD students followed by a scientific presentation by our guest Morvarid Saki. Projects members discussed potential interactions and plans for the next year during the second day.

The meeting a was great opportunity to highlight the current achievements of the project and to focus the work that remains. We now have lot’s of projects and results to look forward to. See you next year for the next meeting and further results!

The Colloque de la Sfµ is the meeting of the French microscopy society. It is held annually and mostly focuses on electron microscopy techniques.

Estelle Ledoux, PhD student partially financed by TIMEleSS, presented her results on EBSD analyzes of plastically deformed polycrystalline MgO. The work is a result of a collaboration between the group at the University of Lille and that of L. Miyagi at the University of Utah.

The results of the work will be useful for the TIMEleSS project for addressing properties of the Earth’s lower mantle.

Frederica Rochira was at the EGU General Assembly 2019 in Vienna. EGU brings together geoscientists to one meeting covering all disciplines of the Earth, planetary and space sciences. The meeting is held yearly in Vienna, Austria, and, in 2019, it was attended by 16,273 scientists from 113 countries.

Frederica Rochira presented her works entitled Detecting structures in the mid mantle using out-of-plane signals in the multidisciplinary session Dynamics of the mantle in the Earth and planetary bodies: from magma oceans to the present day.

The session, co-organized by TIMEleSS members, included four oral presentations on Thursday as well as 12 PICO presentations early afternoon on Friday. The session was an opportunity for scientists of various fields of geosciences (seismology, geodynamics, mineral physics) to present the results of her works and discuss their implications for understanding the dynamics of mantles, on Earth and other planetary bodies.

Nights will be shorts for the next four days. Let’s cross fingers, we need data for our next multigrain diffraction datathon!

Matthias Krug and Frederica Rochira gave presentation in front of their institute in Münster.

Matthias presented his work on Jan 8th and Frederica on Jan 21st. These presentations were an opportunity for the students to display their works in front of their colleagues, get feedback, and new ideas for their project.

Estelle Ledoux and Jeff Gay presented they current work at the PhD student days for the UMET lab in Lille. The symposium is organized yearly in January.

The full program of the symposium can be found online in the following document.

This one-day meeting attracted an international and interdisciplinary group of deep Earth scientists, PhDs and Master students, with keynote talks given by Jennifer Jackson (Caltech), Jeroen Ritsema (University of Michigam) and Sebastian Rost (University of Leeds), and a poster session with wine and cheese.

The full program of the symposium can be found online in the following document. 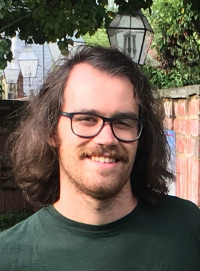 Jeffrey Gay is a PhD student in the Earth and Planetary Materials group at the Université de Lille since October 2018.

He received a Bachelor degree in Geology from the Montana State University and a Master degree in Geophysics from the University of Utah in the United States. He is interested in deep Earth materials interactions, extreme conditions experiments, and the deformation properties of minerals. In his free time, he can be found snowboarding, climbing, and cycling. In the past, Jeffrey taught mineralogy and structural geology as a teaching at the University of Utah.

His PhD project is funded by the TIMEleSS project. His role within TIMEleSS will concern phase transitions in mantle minerals.

Federica Rochira and Estelle Ledoux attended the Doctoral Training on Internal Earth in Les Houches during the last two weeks.

The lecture topics included Earth magnetism, with Céline Guervilly and David Cébron, Mineralogy by Nadège Hilairet and James Badro, Mantle Dynamics by Clint Conrad and Maylis Landeau, and deep Earth Seismology by Ed Garnero and Pierre Boué. Xavier Le Pichon gave the introductory seminar, a rare opportunity to meet one of the fathers of plate tectonics!