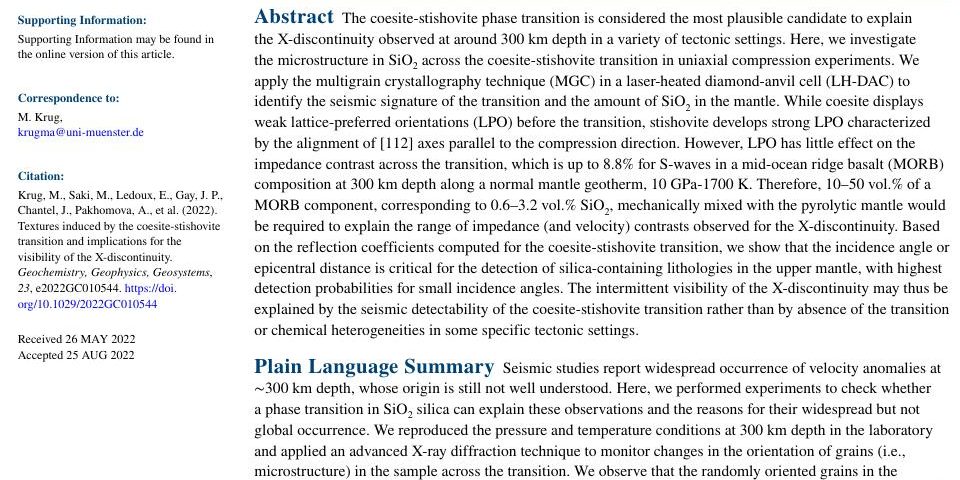 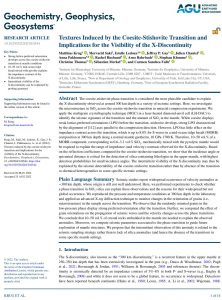 September 2022 is a good month for the TIMEleSS project: we have a second publication in the journal Geochemistry, Geophysics, Geosystems by the American Geophysical Union! TIMEleSS PhD student Matthias Krug is the first author of Textures induced by the coesite-stishovite transition and implications for the visibility of the X-discontinuity. The work is a result of the TIMEleSS collaboration and involves Morvarid Saki, Estelle Ledoux, Jeffrey P. Gay, Julien Chantel, Anna Pakhomova, Rachel Husband, Arno Rohrbach, Stephan Klemme, Christine Thomas, Sébastien Merkel, and Carmen Sanchez-Valle as co-authors.

Coesite is a high pressure polymorph of SiO2 formed from quartz at pressures above 2 to 3 GPa. In the Earth coesite is formed at approximately 70 km depth or more, depending on the exact temperature conditions. At pressures of 8 to 11 GPa, corresponding to approximately 250 to 300 km, yet another transformations occurs and coesite becomes stishovite. Stishovite was discovered experimentally in 1961 by Sergey M. Stishov and later found in Meteor Crater in Arizona. In parallel, seismic studies report widespread occurrence of velocity anomalies at ∼300 km depth in the Earth’s mantle, whose origin is still not well understood. In this work, Matthias Krug performed experiments to check whether the phase transition in SiO2 from coesite to stishovite could explain these observations and the reasons for the widespread but not global occurrence of the X-discontinuity at 300 km depth.

We reproduced the pressure and temperature conditions at 300 km depth in the laboratory and applied an advanced X-ray diffraction technique to monitor changes in the orientation of grains (i.e., microstructure) in the sample across the transition. We observe that the randomly oriented grains in the low-pressure phase coesite display strong preferred orientation when transformed to stishovite after the transition. In order to relate the experimental observations of grain orientations to the seismic detection of the X-discontinuity, we then computed the effect of grain orientations on the propagation of seismic waves and the velocity changes across the phase transitions. We conclude that 10 – 50 vol.% of crustal rocks embedded in the mantle are needed to explain the observed anomalies and propose that the intermittent observation of this anomaly is related to the seismic sampling strategy rather than to lack of silica anomalies (and hence the absence of the transition) in some specific mantle settings.